'But now of later time the same ditch is inclosed, and the banks thereof let out for garden-plots, carpenter's yards, bowling alleys, and divers houses thereon built, whereby the city wall is hidden, the ditch filled up, a small channel left, and that very shallow.'


At 100 Minories we will be excavating the City ditch which surrounded the City of London. A wall and ditch was built around the landward sides of the Roman settlement of Londinium around 200 AD, and along the Thames from c 280 AD. Following the re-occupation of London by King Alfred in 886 AD the walls and ditch resumed their defensive function and there is evidence for the continued repair, rebuilding and strengthening of the City wall and bastions throughout the medieval period. In addition archaeological excavations have shown that the City ditch was repeatedly cleaned out and recut.

Whilst the walls and ditch were maintained throughout the medieval period, by the end of the Tudor period there were increasing encroachments onto the City ditch, and the whole area immediately outside the City walls was in the process of being built up and becoming a new suburb.


A valuable source for London archaeologists is John Stow's 'Survey of London', originally published in 1598 and containing historical information on the history of London, as well as personal observations from Stow's own lifetime. John Stow was born about 1525 and was a merchant tailor who lived in the east of the City, he was a keen antiquarian and gathered the information for his Survey of London over several decades. The Survey describes the situation, history and main features and customs of London, before describing each Ward in turn. The book is available online from British History Online here. Stow died on April 6th 1605 and there is a memorial to him in St Andrew Undershaft and every three years the quill pen held by his effigy is renewed by the Merchant Tailors in a memorial service.
Stow describes the City walls in his Survey, referring back to an earlier chronicler:


'William Fitzstephen, in the reign of King Henry II, writing of the walls of this city hath these words: " The wall is high and great, well towered on the north side, with due distances between the towers. On the south side the city was walled and towered, but the fishful river of Thames, with his ebbing and flowing, hath long since subverted them."


Stow first reference is to the digging of a ditch 200 feet wide around the City between 1211 and 1213, followed by a succession of dates when the ditch was 'cleansed' or the walls repaired. Clearly there were issues with the ditch silting up and with rubbish being dumped in it.


Several of Stow's sources refer specifically to the section of ditch between the Postern Gate (north of the moat of the Tower of London, now preserved in the Tower Hill underpass) and Aldgate, this is the area in which 100 Minories is sited. In 1354 the City ditch was overflowing into the Tower moat, and Edward III ordered the ditch cleared out, with in 1519
'cleansing and scouring the common ditch between Aldgate and the postern next the Tower ditch'
and in 1540
'the same was cleansed, namely the Moor Ditch, and not long before from the Tower of London to Aldgate'.


In 1569 the ditch was again cleaned between Aldgate and the Postern and a new 'sewer' and 'wharf of timber from the head of the Postern into the town ditch' was made, presumably a drain and a timber revetment. Stow describes how previously:


'Before the which time the said ditch lay open, without wall or pale, having therein great store of very good fish, of divers sorts, as many yet living, who have taken and tasted them, is can well witness: but now no such matter: the charge of cleansing is spared and great profit made by letting out the banks, with the spoil of the whole ditch.'


Later in his Survey Stow describes buying, as a boy, milk from the dairy farm at Goodman's Fields, east of Minories, and vividly sets out the ongoing transition of the Minories area:


'the ditch without the walls of the city which of old times used to be open, always from time to time cleansed from filth and mud, as need required; of great breadth, and so deep , that divers, watering horses where they thought it shallowest, were drowned, both horse and man. But now of later time the same ditch is inclosed, and the banks thereof let out for garden-plots, carpenter's yards, bowling alleys, and divers houses thereon built, whereby the city wall is hidden, the ditch filled up, a small channel left, and that very shallow.'


Whether we will be able to archaeologically identify individual 'cleansings' of the ditch remains to be seen, however Stow does provide a framework for the management of the ditch, and the evolution of the area to the east, that will help set the archaeological evidence in its wider context. His Survey is a plainly written, yet very evocative description of London, and the period of his life corresponds to the development of the 100 Minories area, and the creation of the new suburb. Stow's mixing of personal observation and recollection juxtaposes with his historical sources and is a wonderful source on Elizabethan London and its life.
on Sunday, November 09, 2014

Urban Archaeology's Chiz Harward is carrying out a survey of medieval cross-slabs in Gloucestershire, for more information please see: http://gloscross-slabs.blogspot.co.uk/

Chiz has worked within the archaeological profession for thirty years across the UK, working within the historic core of London for over fifteen years. Chiz was a Senior Archaeologist and Project Officer at the Museum of London Archaeology Service from 1998-2008, where he supervised, assessed and analysed some of London's largest and most complex excavations, as well as numerous smaller sites and projects.

Chiz Harward can be contacted via email at chiz@urban-archaeology.co.uk

Chiz Harward is a Member of the Chartered Institute for Archaeologists (MCIfA), the highest level of individual accreditation. Chiz served for 4 years on the IfA Council, and was previously a member of the Professional Development and Practice Committee, Registration Committee (Organisations), the IfA Working Party on Self-employment, and the IfA Remuneration Working Party. Chiz was also chair of the Diggers' Forum and edited their newsletter: the Forum Dispatch. 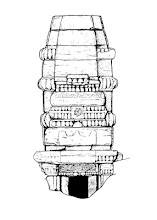 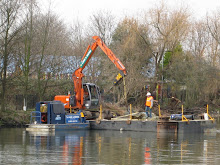