Out now! Feature article in Current Archaeology Issue 390 on Urban Archaeology's work at the Grade 2* listed Dulverton House. Refurbishment for The King's School during Lockdown transformed this building into a new Sixth Form centre, but its origins lie many centuries ago.
Archaeological recording and excavation demonstrated that parts of the south wall of the 11th century chapel of St Bridget survived within the building, and that the primary phase of the Infirmarer's Lodging dates to the early 14th century, with dendrochronology dates by HLF funded Gloucester Dendrochronology Project. The Lodging consisted of a two storey building, with cross-wings housing a chapel, and a guest chamber. A late 15th century kitchen extension yielded important evidence of the use of fish, bird and small mammals in the monastic diet.

After Dissolution the building, which had developed into a complex of wings and extensions, housed a Prebend (canon) of the new cathedral, before becoming part of King's school in the 1950s, with the fabric of the building providing much evidence for the changing use and interior decoration of the building.

For the past few years Urban Archaeology has been working at Holy Trinity church in the Cotswold town of Minchinhampton first during a major re-ordering of the church, and then on follow up works in the church and churchyard. The church is a fascinating building, Norman in origin (although no standing fabric survives), it was largely rebuilt c1338, and then again in 1842; Chiz Harward is currently completing a major history of the church.

During the 2016 re-roredring the floor was taken up and many architectural fragments from the medieval church were discovered by the archaeologists from Urban Archaeology. Probably the most important of these were five fragments of limestone slab which were incised with the neatly-incised marks of an architectural design and an article on these has now been published.

The life-size design would have been set out by the master mason to sketch out the geometry of new windows, and dates to the early-mid 14th century, the same date as the major rebuild of Holy Trinity in c1338, of which only the tower and transepts survived a further rebuilding in 1842.

After carefully preparing the surface of the stone slab, the mason set out a baseline, and then used compass, mason’s square and parallel rule to construct a grid based on the square root of two (1:1.41) (who said maths wasn’t useful). The detail of the design was then worked out using arcs drawn using compasses, with ogee curves and hints of cusps and quatrefoils. Although only fragments survive, the geometrical basis of medieval tracery means the design can be extrapolated to form a window of two trefoil-headed lights, with a quatrefoil above.

The slab is likely to be from a stage in the design process where the mason is still working out the geometry, perhaps for showing the patron; later versions would have been used as a base drawing for cutting leather or wooden patterns, which were used to carve the finished stone of the tracery. Although medieval architecture survives in so many churches, houses and other buildings, these architectural drawings are relatively rare and give not only a real insight into the geometric underpinnings and design processes used by medieval masons, but also the process of dialogue and negotiation between patron and mason as the designs developed.

The design does not exactly match window tracery in the north or south transept, but could be for windows in the chancel: early 19th century illustrations show Decorated window tracery matching the design.

A Tudor graffito of Edward 6 from Gloucester cathedral's Lady Chapel?

Visitors to Gloucester cathedral often notice the graffiti and masons’ marks scratched on its walls, now new research by Urban Archaeology into one elaborate and finely executed drawing, tucked away in the Lady Chapel, suggests it is a portrait of the young King Edward 6.
The drawing is just one of many graffiti in the northern first floor singing gallery of the Tudor Lady Chapel and is found on the gallery’s sloping stone counter at which the choristers would have stood to sing. The graffito is about a foot tall, neatly drawn with a sharp pointed implement, and shows a clean-shaven man in mid-sixteenth century clothes standing legs apart in a confident and striking pose. His bobbed hair is covered in a Tudor bonnet with a large feather, and he wears a striped or slashed jerkin cinched at his waist, a sword or dagger on his belt. To his left a hunting hound wears a studded collar, to his right an antlered deer. In the background is a church on a hill, with soaring spires -so not the Tudor-period cathedral.
The pose and dress is strikingly reminiscent of the 1547 portrait of the young Edward 6 by the workshop of ‘Master John’ currently in the National Portrait Gallery. Could this graffito be a copy of an official portrait of Edward 6 (who died in 1553), and if so, what date might it have been made? The numerous other graffiti appear to largely respect and fit around the design, and although notoriously hard to date there is no reason to suppose the graffito could not be 16th century.
Chiz Harward, who carried out the research, commented ‘The subject of the young king out hunting is a common theme in Tudor imagery; if it is indeed a contemporary drawing then it is a powerful demonstration of the power of royal portraiture as a means of creating ‘brand’, as well as the artistry of a cathedral chorister.’
The research, by Chiz Harward of Urban Archaeology, is published in the latest Transactions of the Bristol and Gloucestershire Archaeological Society https://www.bgas.org.uk/.
on Sunday, April 24, 2022

Building on the excavation and publication of major monastic sites such as the priory, hospital and cemetery of St Mary Spital (MOLA) Chiz has found himself increasingly working on ecclesiastical and monastic sites, digging at numerous Cotswold churches (as well as the occasional Cotswold pub) over the last decade. Extensive work at Gloucester cathedral has involved both excavation and standing building recording and last year Urban Archaeology spent Lockdown v1.0 combining excavation and ‘buildings archaeology’ in a very 3-D project at the former Infirmarer’s Lodging of St Peter’s, Gloucester.

Winchester is an inspiring and daunting setting for any urban archaeologist, the site of so many important events in archaeology from the game-changing work of the Biddles and the Winchester Excavations Committee, to the birth of Harris’ matrix and Single Context Recording. Chiz hopes to bring his experience of urban excavation, building recording and project planning to the role and to build on the work of John Crook and the cathedral team.

Working with the wider cathedral team Chiz will seek to ensure that the cathedral and its close continues to be conserved, understood and enhanced, that where necessary it is excavated and recorded to the highest standards, and that the archaeology, history and heritage of this extraordinary site is brought to the widest audience possible.

A Field Guide to Larking - pen and ink illustrations

Lara Maiklem's new book 'A Field Guide to Larking: Beachcombing, Mudlarking, Fieldwalking and More' is out now from Bloomsbury. It's a really beautifully produced volume, packed full of facts and information, illustrated by Johnny Mudlark's outstanding artefact paintings, and exquisitely designed by Clare Baggaley. I was lucky enough to be asked to contribute pen and ink illustrations.

"A Field Guide to Larking is a practical, interactive and inspiring guide to 'larking' from the bestselling author of Mudlarking.

To lark is to get out and about, to explore the world around us and to discover the little treasures hiding in plain sight. We think, of course, of mudlarking but there is also beachlarking, fieldlarking or even simply exploring your own home with fresh eyes.

In this beautiful field guide, Lara teaches us how to lark for ourselves. There are maps and charts, tips and lists, and colour illustrations throughout to help identify finds. From tide tables for mudlarkers to a flint guide for fieldlarkers, this book is richly informative and yet small enough to pop in a pocket. Like a journal it invites you to interact - to make notes and record finds along the way.

If Lara Maiklem's first book was a glimpse into a hidden world, with this field guide she shows us how we can discover it for ourselves"

My usual illustration work is super-accurate technical artefact drawings, but for this job I had to develop a looser style that fitted with Johnny Mudlarks' beautifully intricate paintings, whilst still being accurate and informative. It was a real pleasure to have to sit down and draw such a wide range of objects, from buttons and buckles to seaweed and skulls.
The book is absolutely gorgeous, and I feel works on every level: engaging and informative text, lush illustrations, fabulous design, and all in all just a lovely thing to hold in your hands.
Larking is available to buy from your local bookshop or from Bookshop.org.
on Thursday, August 26, 2021

A serendipitous finding in a book

Urban Archaeology often works at Gloucester Cathedral, and although we have a small library of books and reports on the priory and cathedral, we didn’t have a physical copy of ‘The Cathedral Church of Gloucester, a description of its fabric and a brief history of the episcopal see’ by HJLJ Massé, so when we spotted a cheap copy online we snapped it up.
Originally published in 1899, we got the 1908 third edition: it is a small book of 136 pages, with 49 illustrations, many taken from stunning pen and ink drawings by EJ Burrow, a Cheltenham artist and archaeologist. The author Massé was a metalworker who also wrote the Bell’s guide to Tewkesbury and Deerhurst, as well as guides to several French churches. The book is a pocket sized hardback, the 1905 General Preface set out the series’ aims which it meets handsomely: 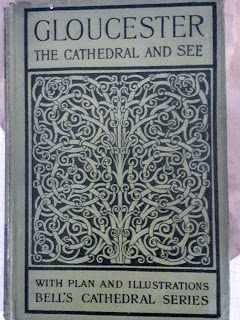 ‘This series of monographs has been planned to supply visitors to the great English Cathedrals with accurate and well illustrated guide-books at a popular price. The aim of each writer has been to produce a work compiled with sufficient knowledge and scholarship to be of value to the student of Archæology and History, and yet not too technical in language for the use of an ordinary visitor or tourist.’ 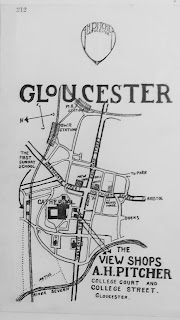 On opening the front cover there was a bit of a surprise: pasted in the inside cover was a trade label for AH Pitcher of Gloucester, who had shops near the cathedral in College Court and College Street, but facing that was the handwritten name of David Verey with  the date January 1981, when he presumably bought (or was given) this copy. Verey is a major figure in Gloucestershire architectural history, writing the original Buildings of England ‘Pevsner’ volumes for the Cotswolds and the Vale and Forest of Dean in 1970, passing away in 1984, so to have his copy of Massé fall into our hands seems serendipitous given that we refer to his books on most of our jobs in the city and shire. 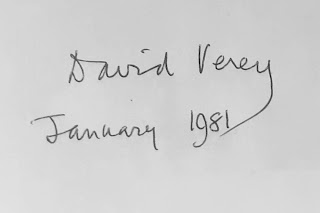 A web version of the 1905 edition, and many others in the series, can be found here.